Cloudy the cat is hoping for a clearer futureGABLESCV

We have recently taken in a stray cat with a badly damaged eye. Cloudy, as he has affectionately been named, was being fed by several people but had not seen a vet for over 5 years. As a result, his damaged eye became swollen, infected and ulcerated and he was in constant pain and discomfort.

It is unclear what caused the damage to Cloudy’s eye but after an examination our contracted vets, Filham Park in Ivybridge, concluded the most likely cause was blunt force trauma such as a kick or a collision with a car. Cloudy was given pain relief and started on a course of antibiotic eye drops in an attempt to get the infection in his eye under control. Sadly Cloudy was in too much pain and he could not tolerate having the eye drops. With the damage to his eye so severe, it leaves us with only one course of action, the complete removal of his eye.

Cloudy is also suffering from gingivitis and severe tooth decay so will need a dental to help him feel more comfortable. It is difficult to predict an accurate age for Cloudy due to the severity of the decay on his teeth but the vet estimated he is only around 7yrs old. Despite everything that Cloudy has been through he remains a very affectionate cat who just wants some fuss, attention and a lap to curl up on.

General Manager, Claire Sparkes said: “Although Cloudy has clearly had a rough time as a stray he is a very sweet boy. Although we are disappointed we cannot save his eye, we are really pleased he has found his way to us so we can put an end to his pain and make his future more comfortable. He has already become a favourite amongst the cattery staff and once he is well enough for us to begin the search for a forever home, we are sure he will have people queuing up.”

It is estimated it will cost us £800 for all of Cloudy’s surgeries and after care, as well as basic care such as flea and worm treatment and vaccinations.

If we are lucky enough to raise more money than is needed it will go towards helping the other animals in our care. 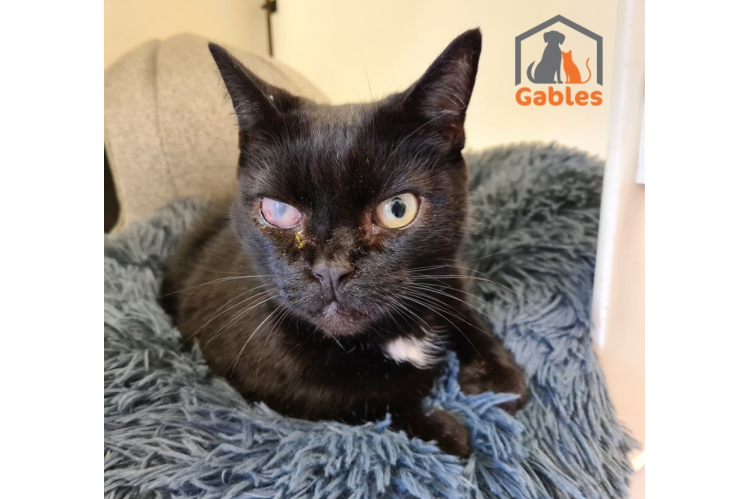